Choosing Wheels and Tires for the 83 Quattro Project

You may recall we previously purchased a set of BRAID Series 6 in 16x9 and mounted some 245/45-16 Bridgestones on them. 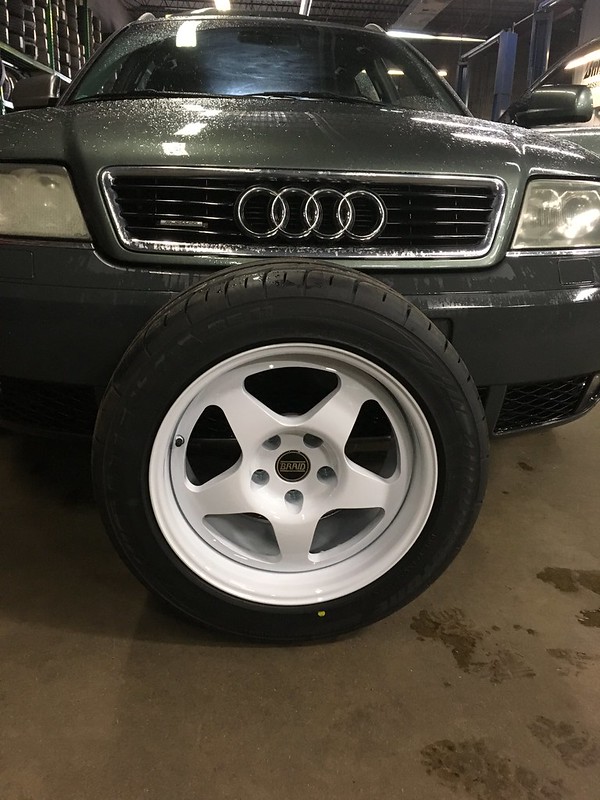 This size combination seems to be typical of what people run on these tribute cars but we ordered them way too soon (obsessed remember) and another build needed them for their project so we let them go. We always thought we would order up the exact same thing again at a more sensible phase of the project. Then we saw this: 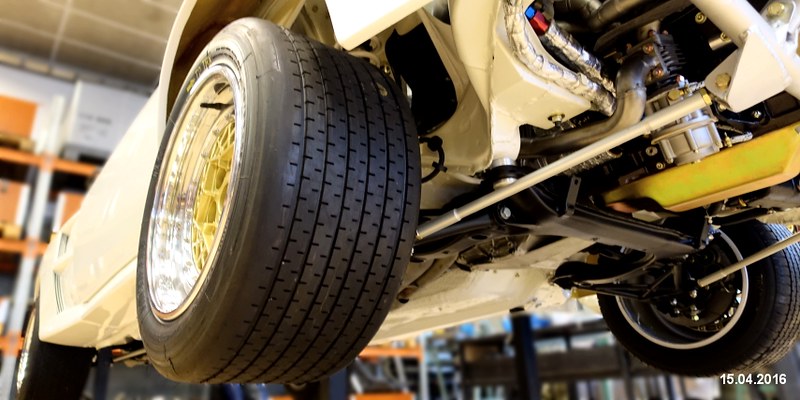 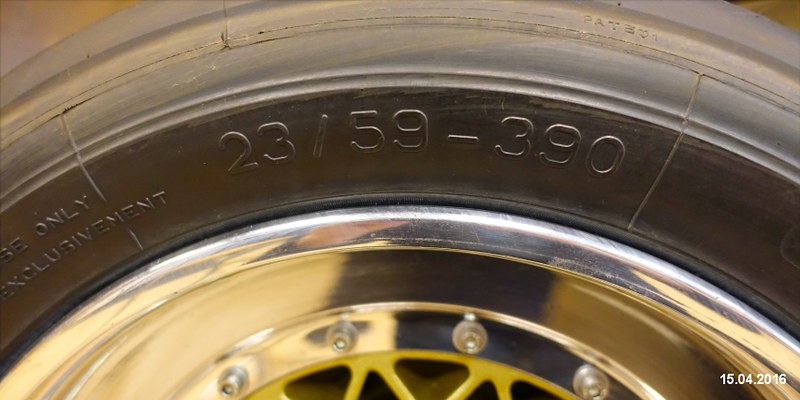 And we knew what we had to do.

We have always loved the Michelin TB15s as we sell hundreds of 911 wheels for them and they look just perfect on those RSR recreations, but we never thought we’d have a car suitable for them as the sizes they come in are either too narrow or too wide for anything we have. Or so we thought. It turns out that back in the day at least some Quattros were running the 23/59 - 15 TB15s (about a 270/40R15) so we knew they should fit on our car too. Unknown though is at what offset and rim width. Michelin only make the 23/59 – 15 in a TB5 now so we ordered up a TB15 in 23/62 – 15 from Coker tire on the condition that we could return it if we didn’t mount it. Specs for the tire are:

Unfortunately we had nothing similar in the shop to test with; or so we thought. One of our customers keeps his 944 Turbo race car in the building and it runs Hoosiers in 275/35R17. The specs on those: are

So just slightly larger than the TB15, apart from tread width which is quite a bit larger. We had us a surrogate. 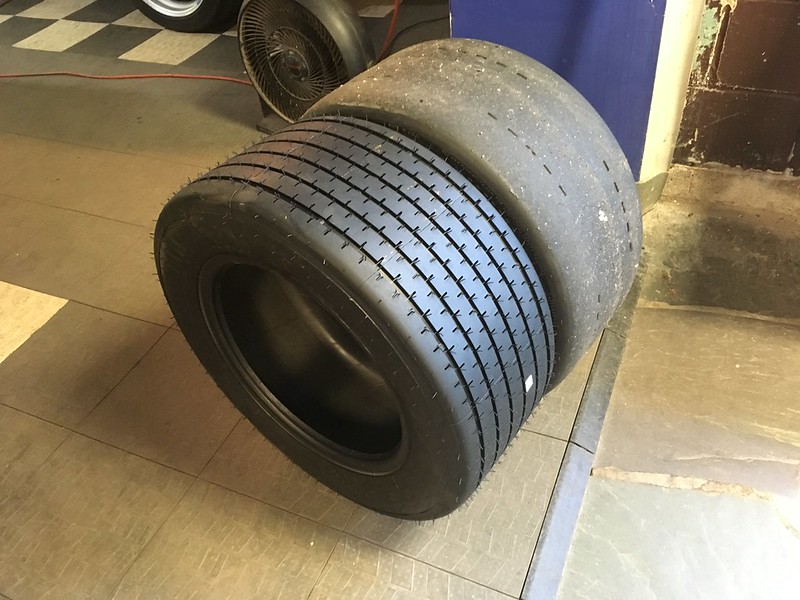 Now some of you might point out that a Porsche 944 is not going to bolt up to a Quattro. Well normally that’s right but we have some hub adapters that allow us to bolt a set of 911 Safari wheels to our Audi Allroad so we employed one of those in our test fit. The 944 wheel, which coincidentally is a BRAID Serie 6, has an offset of 55. Our hub adapter is 27 and we also have some 18mm spacers. That makes the resultant offset of the test setup et11, right about where we anticipate our new wheels need to be. Time to find out. 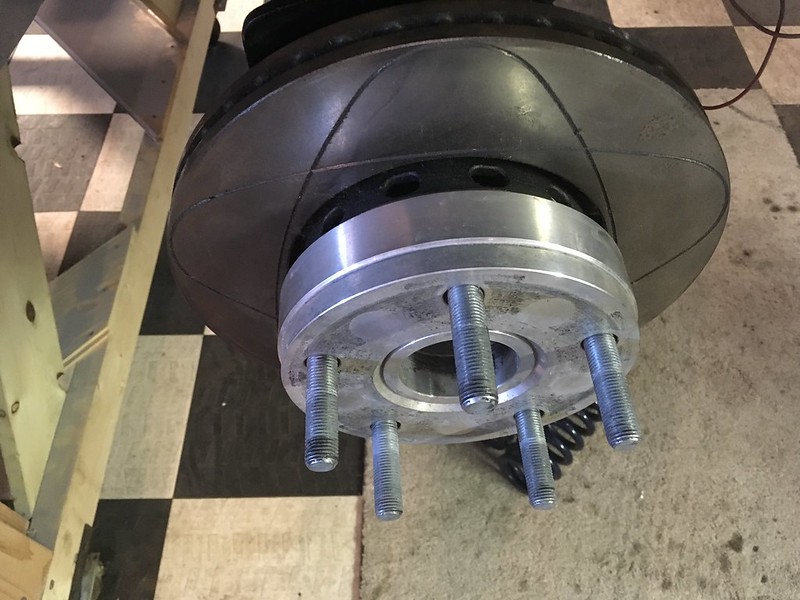 The Hoosier cleared the strut but kissed the tie rod ball joint. Not to worry, The TB15 is not as wide at that point so should clear. 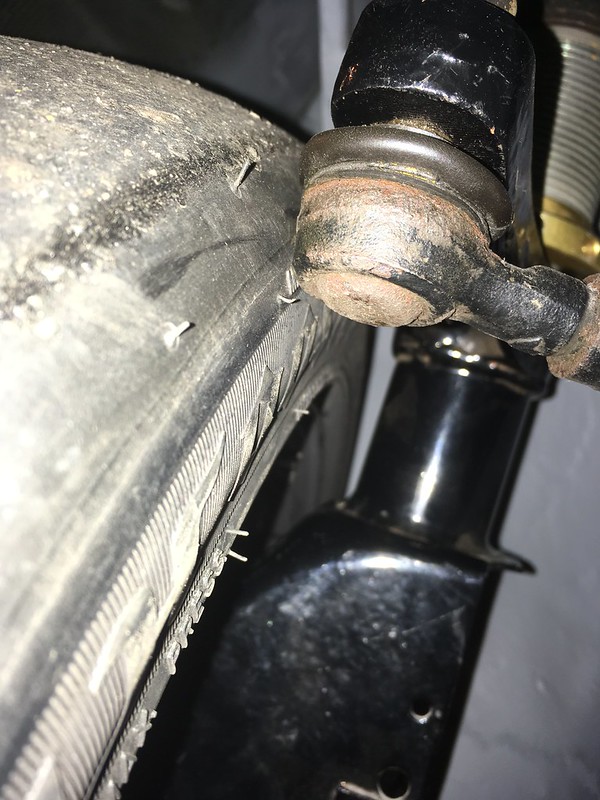 On full lock and full compression the Hoosier barley kissed the rear inner fender. OK, same as above, the TB15 should clear. 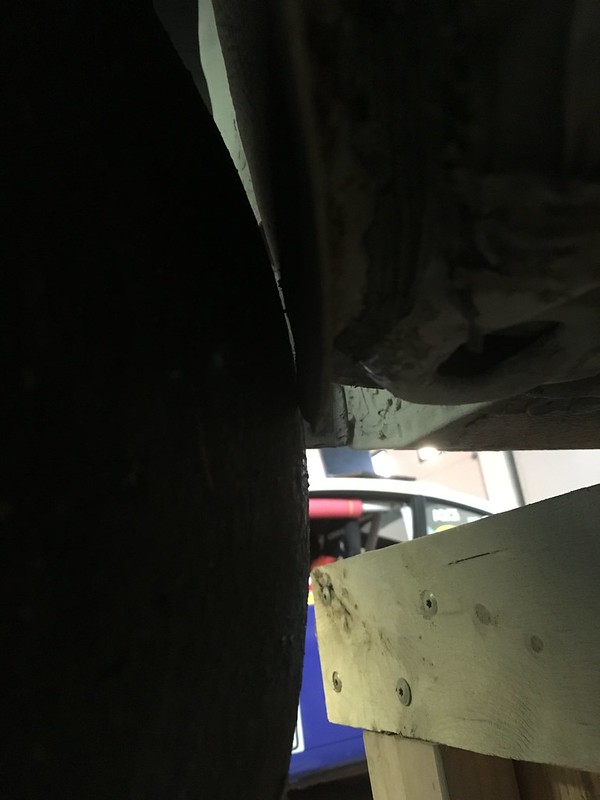 Lots of room under the front fender too: 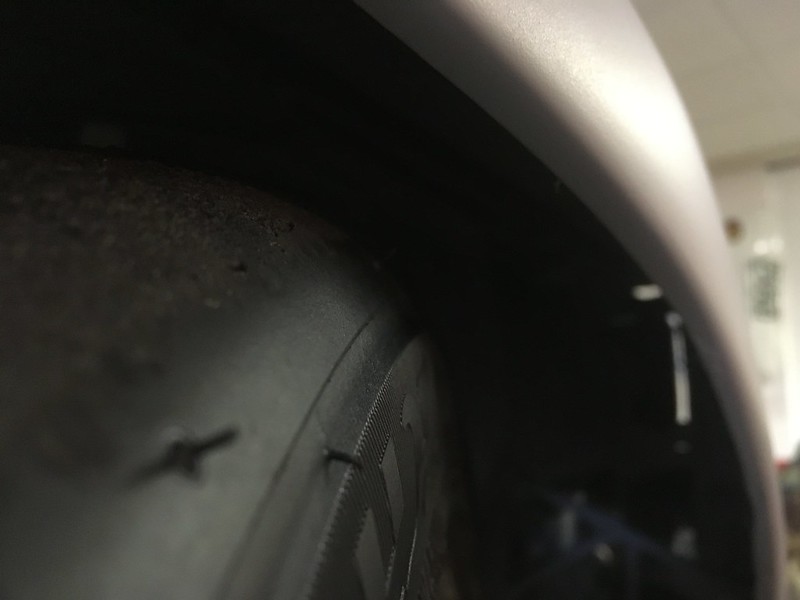 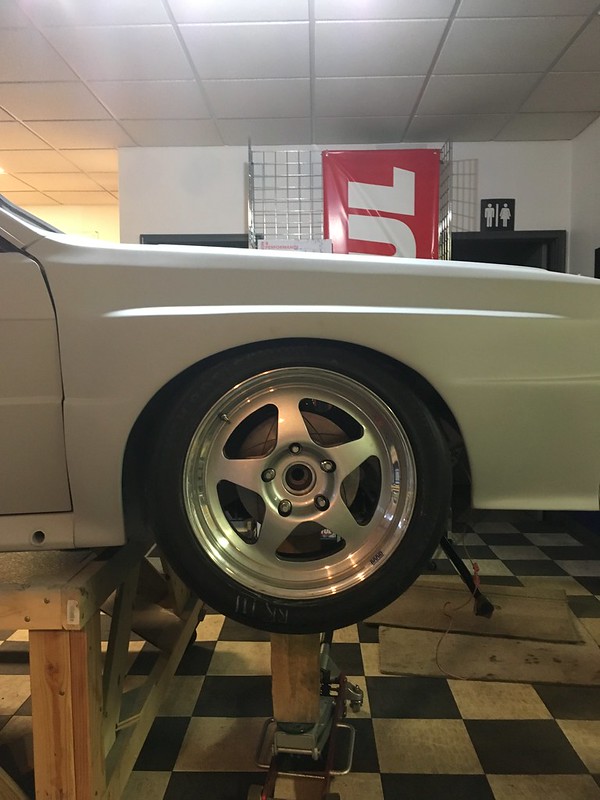 So with the front suspension in its worst orientation (full lock and full compression) the big Hoosier almost fit. We were so happy as we came away very confident that the smaller TB15 would have no issues. Still, we best throw it on the rear just for fun right? Uh oh! What’s this? 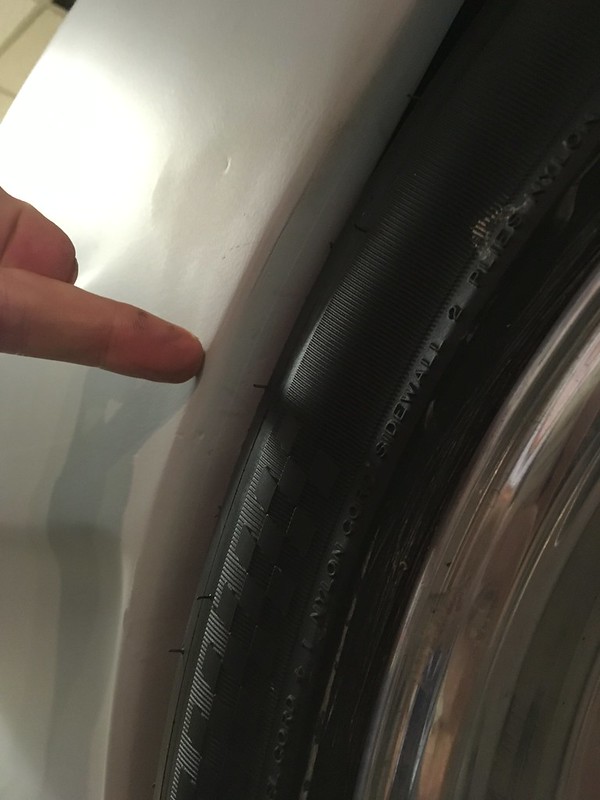 Lots of interference with the rear arch. Who would have thought? It only has to go up and down. It might fit if we tucked it in a chunk and hacked the arches up but then it might rub on the front inside and look odd. We concluded the overall diameter of the Hoosier and the TB15 precluded us from using the TB15 on this car. What to do? Well, remember the picture we found showed a much smaller diameter 23/59 -15? That size is available in a TB15 which might even be a better tread pattern for us anyway. So we returned the TB15 and ordered up Coker’s last set. 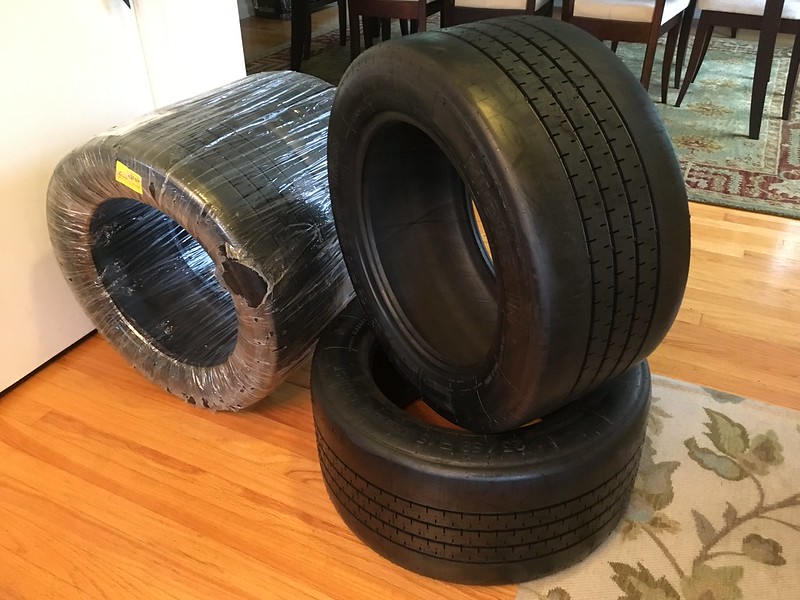 And mounted one on a 15x9 Porsche Serie 1 we had on display to see if that width would fit it well. 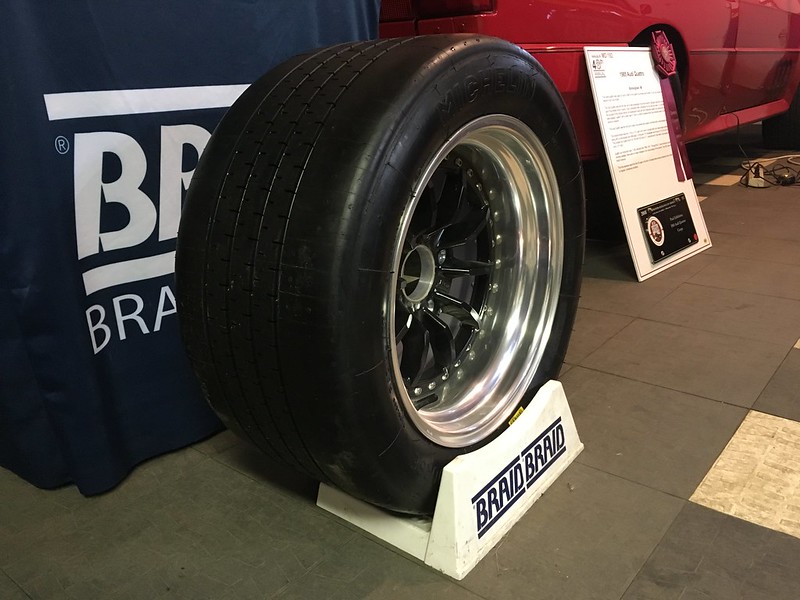 It would probably be happier on a 15x9.5 or even a 15x10 but by going with 15” we have somewhat painted ourselves into a corner, in that there aren’t any other 15” tires this wide available and who knows how long the TB5 will be around. By restricting ourselves to a 9” wide rim we have at least left the door open to some currently available and suitable 245 or even 225 tires. Hopefully we never need to go through that door.

So the next big issue to resolve: what 15x9 BRAID wheels to order to mount these on? Her are the candidates:

What would you choose?