We Make The RALIVAN faster!

We make the RALIVAN faster with an age-old proven mod. We applied stickers. If each one adds 5 horse power this should be good for about 220! You may recall our previous RALIVAN had our now traditional livery on so it was obvious this one was going to get the same treatment; especially considering the base color is white. We couldn’t wait to see it next to the 911 with the trailer in tow so we got busy. We had help from a professional and friend Douglas who works with vinyl all the time but kept reminding us that he doesn’t wrap vehicles. Never the less he gets what we are doing, likes the same music as us and has a very good eye. He doesn’t like Hobnobs though so we kept a close eye on him. We had some great collaborative break-throughs together which was extremely satisfying. One plus one does indeed equal three sometimes. So, this was the plan: 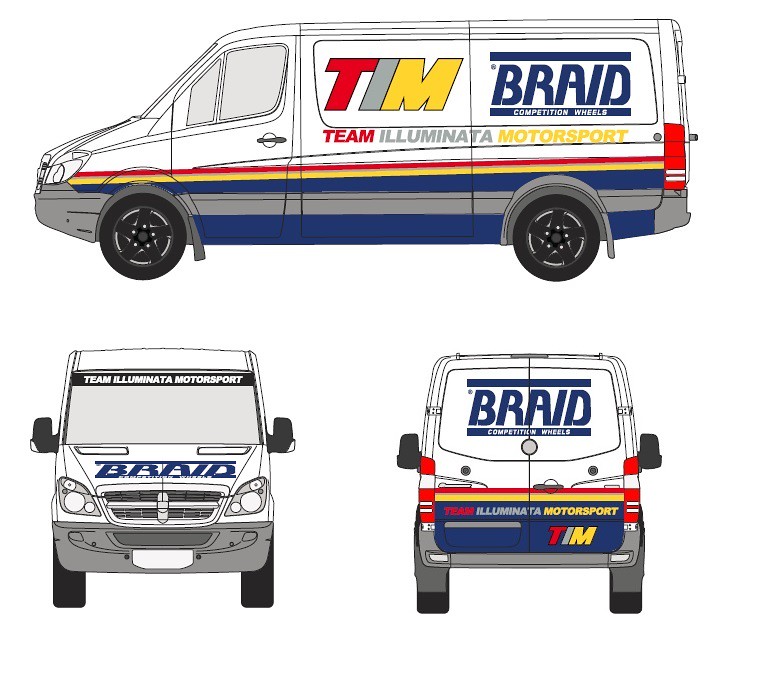 and this was the process. Choosing the right shades was much harder than we thought it would be. 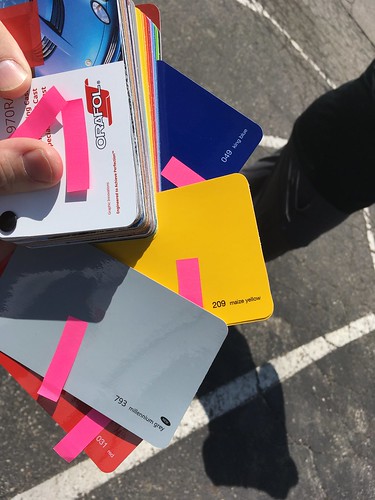 Then Douglas cut everything out (“plotted” the pros call it) 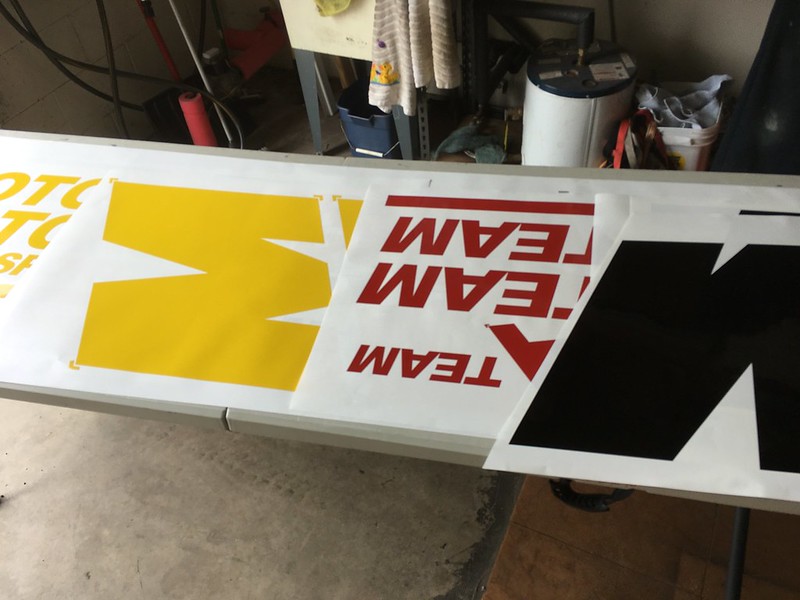 And then started mocking up. It was at this stage that we realized how curvaceous our rectangle on wheels is; very! 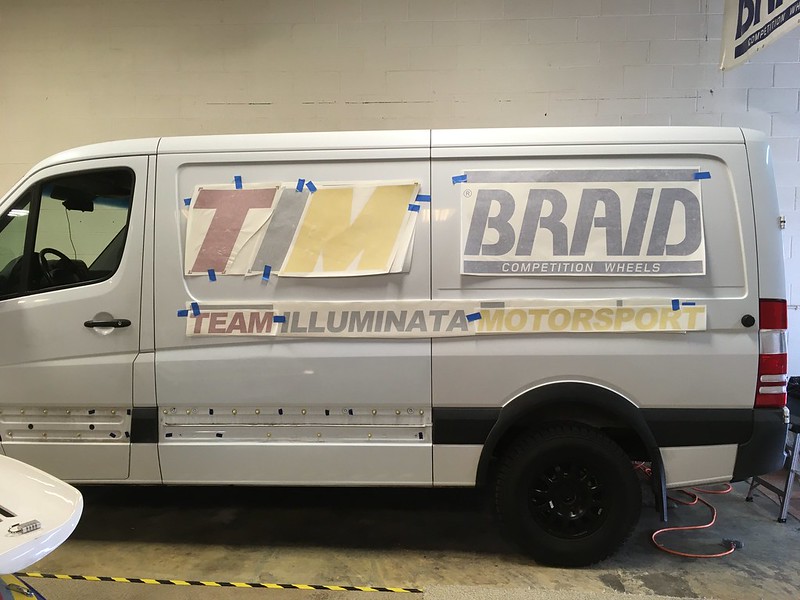 Once we were confident everything was in the right place, we stuck it down. 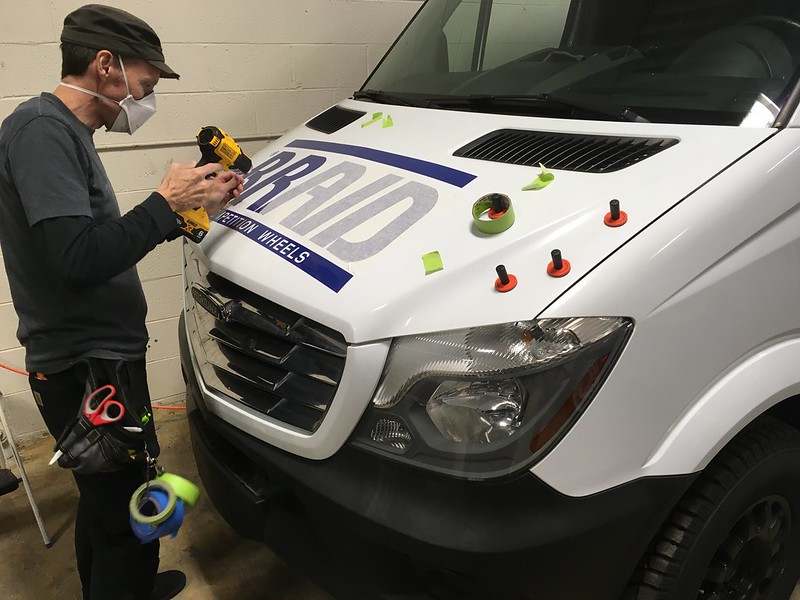 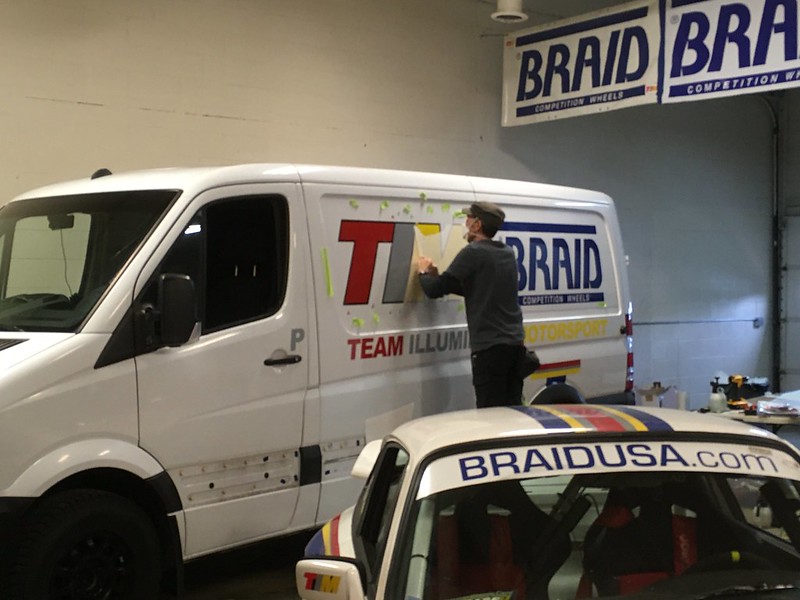 The windshield banner was a challenge. 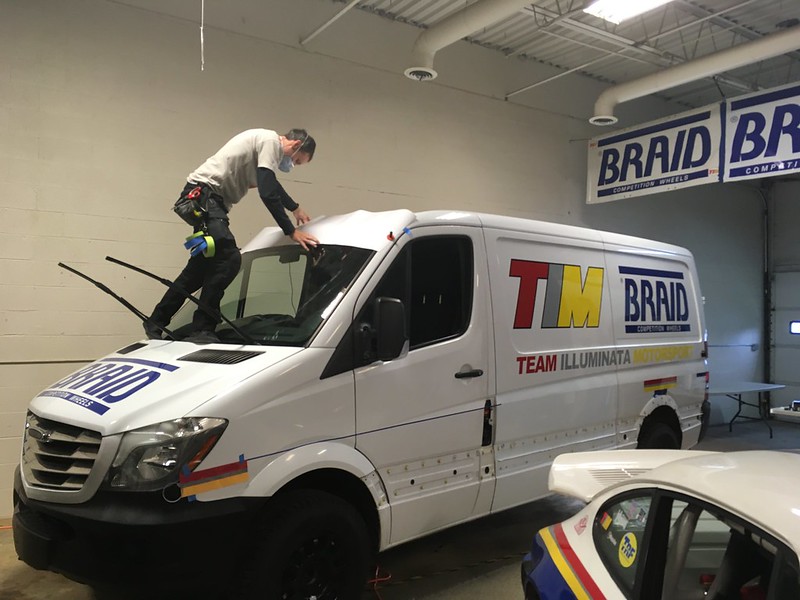 But the blue side panels and especially the multi-colored stripes proved the most daunting. 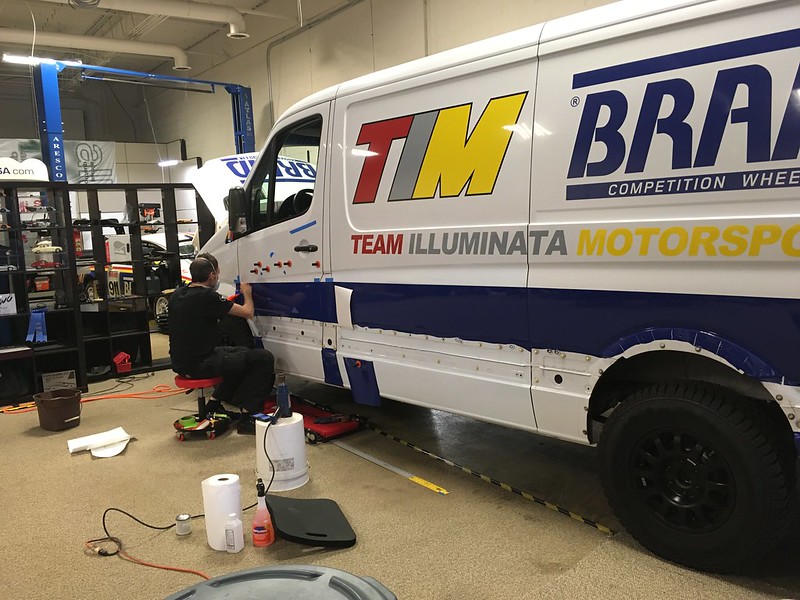 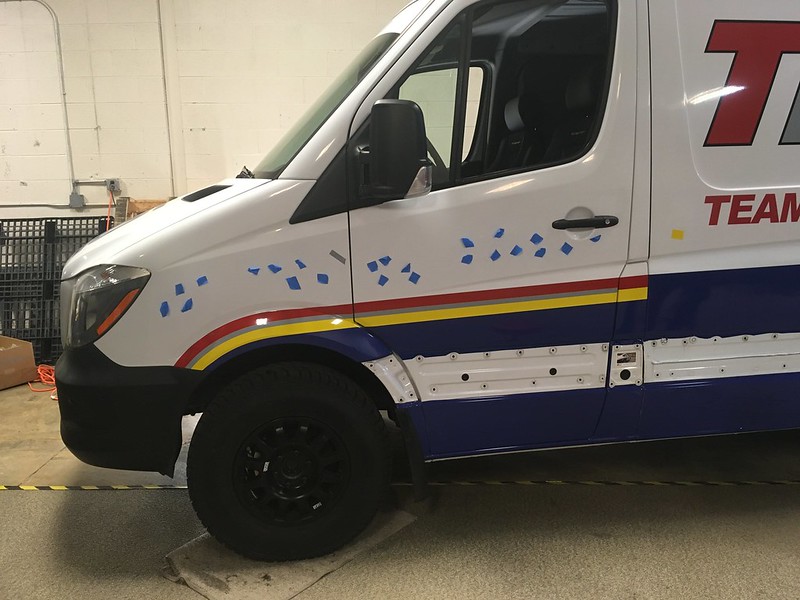 We still don’t know how Douglas got the stripes to bend like that. They were straight when he started. Some people on the project didn’t think it was possible to wrap the side moldings in film without it falling straight off, some people. We wrapped one and left it outside for a week first and it was fine. 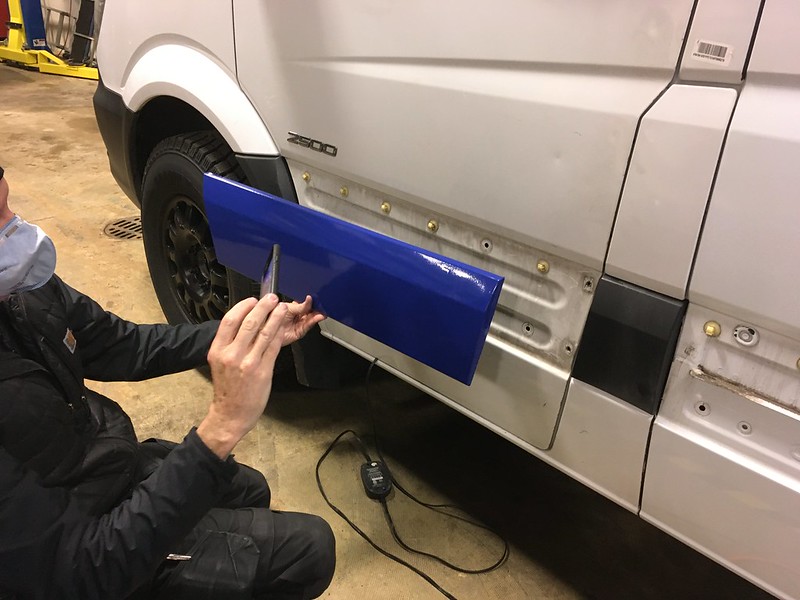 To be honest the worst part was getting them off without breaking any clips. We failed miserably at that and had to buy many new ones. We think it was worth it though. Don’t you? 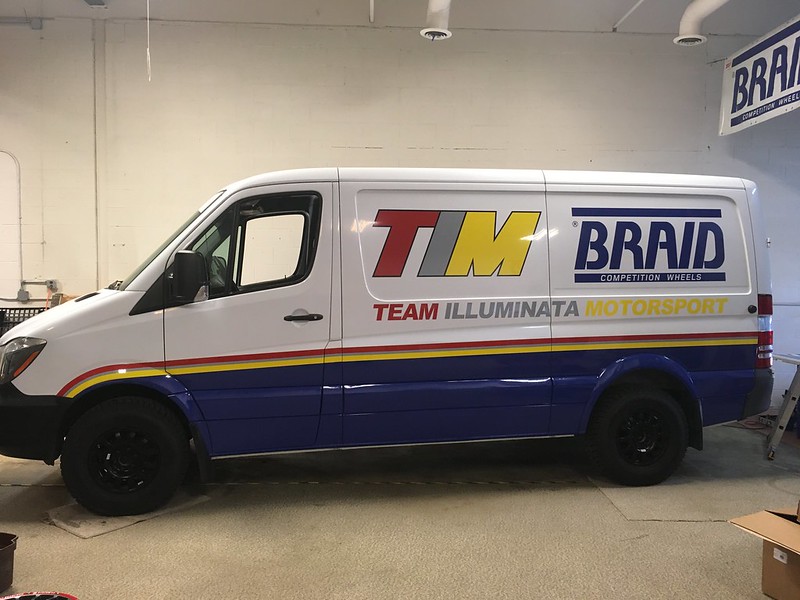 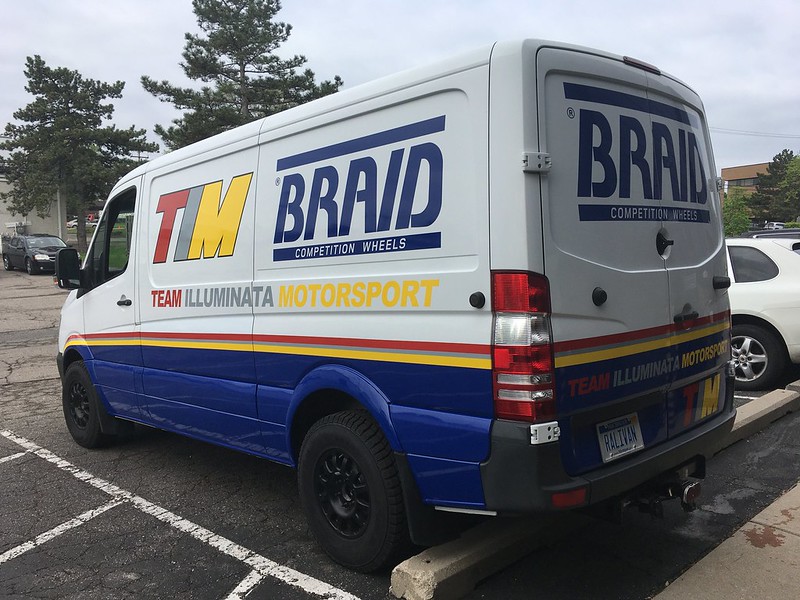 One last little touch: we added some film to the ridges on the roof that rub on the garage door’s weather stripping on the way in. It mimics the stripes on the roof of the 911. Apart from this picture nobody will ever see it but we think it’s possibly our favorite part! 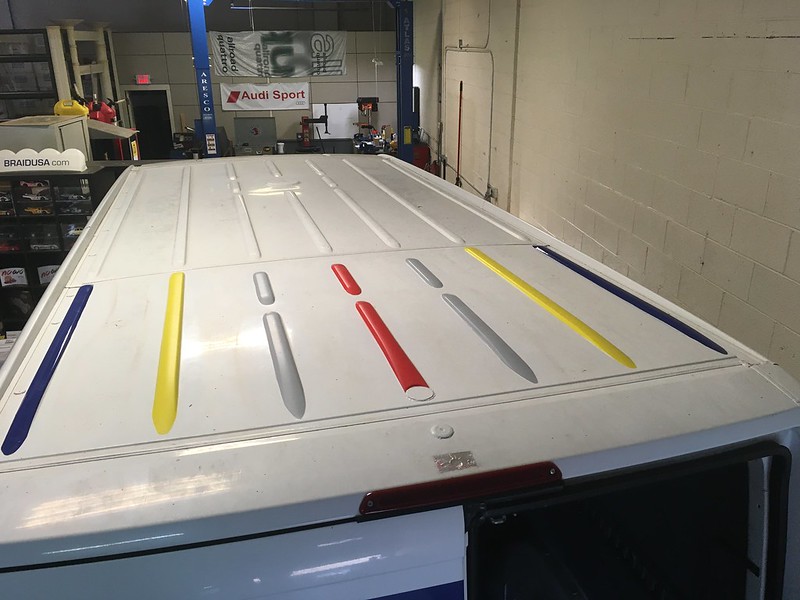